Children will compete against each other to see who can find the word “freedom” first.

On two index cards, write the word “FREEDOM.” Fold the cards as small as possible and stick each in a separate balloon. Blow up all balloons, filling the others with blank pieces of paper folded up.

Fourth of July celebrations are coming up. It is the celebration of our nation’s independence, our nation’s birthday, which we love to celebrate with lots of noise! Let’s remember this as we play our game.

Before we were the land of the free, we were controlled by England. Even though they were so far away, they made our laws, controlled our finances, made us pay taxes, and so on and so forth. Eventually, some brave and determined Americans got tired of being controlled and decided to fight back. It took us a while to get through all of those balloons to find our freedom, but with persistence we were able to do it! Just like it took America’s founders a long time to get what they wanted. They kept fighting for their dream, never gave up, and were eventually rewarded. If we keep fighting for what we know is right, always having our faith in God, he will reward us in the end.

Looking for more Summer activity ideas for your kids?  Then don’t forget to Become a Fan on Facebook, Follow Us on Twitter and Come Hangout with Us on Google+!

4th of July Tangle – A Bible Game about Independence 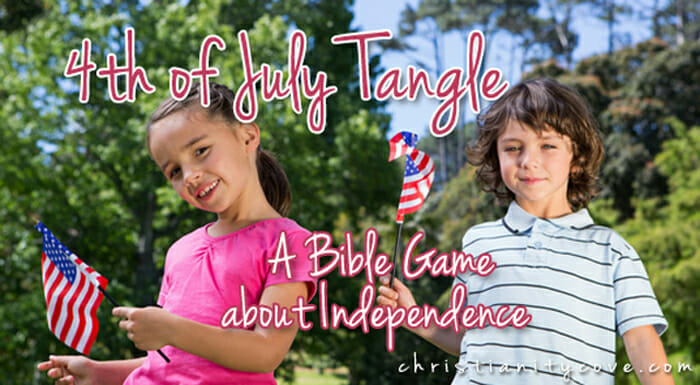 4th of July Tangle – A Bible Game about Independence