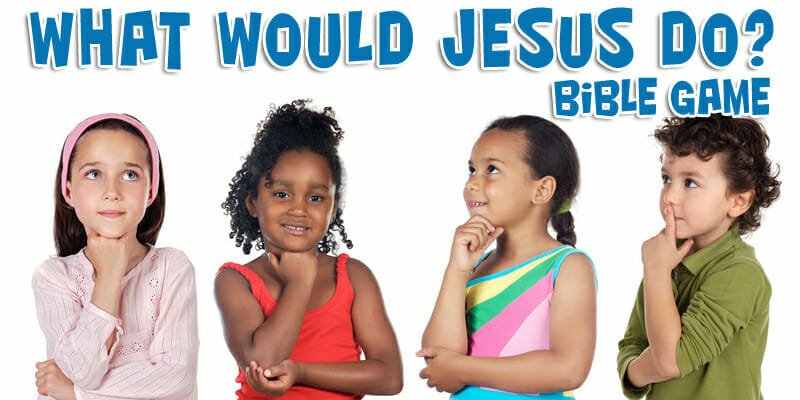 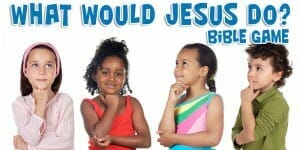 In this Bible game, children are given the opportunity to decide what Jesus would do at their age.

Remember, Jesus never sinned. We’ll take turns picking scenarios out of a hat. We’ll read the predicament and try to decide what Jesus would do – or what we should do if it happens to us!

What Would Jesus Do? Bible Game

Below are some predicaments. Cut them into strips and put them in a hat. Have kids take turns picking them, reading and figuring out what the right thing to do would be:

1. You’re in a store. You see a dollar on the floor. Obviously, somebody dropped it. You remember an old saying a friend once taught you: “Finders, keepers; losers, weepers.” What would Jesus do?

a. leave it there

c. take it to the cashier

d. ask around and if nobody says they lost it, then pocket it

Answer: C, because someone may have lost it and come back, hoping there was a good Samaritan.

2. Your friend pulls his cat’s tail really hard. The cat meows, but your friend shrugs. “It doesn’t hurt,” he says. “That was a laughing meow! You try it!” What would Jesus do?

a. pull the cat’s tail to be polite to your friend, but not hard enough to hurt the cat;

b. pretend you’re pulling the cat’s tail, but really don’t

c. point out how the cat might feel and how helpless it is

d. tell your friend that if he wants to continue being friends, he’ll have to quit acting up

Answer: C again. A and B lack courage and honesty; D is a bit harsh. You should give your friends a few chances, then back away with sadness if they are consistently mean spirited.

a. jump out and scare him, but not as badly as he did it to you

b. jump out and scare him equally harshly; an eye for an eye, as the Old Testament says

c. scare him worse than he scared you; that way he’ll know you have more power and he shouldn’t mess with you

d. tell him that you could have scared him and that you didn’t because you don’t like being treated that way

Answer: D. Answer A is compromising and accomplishes nothing; b represents Old Testament philosophy, which has been replaced by “don’t return evil for evil.” C would be the most common response, but kids should remember: being a bigger bully doesn’t make you good; it makes you worse than the bully. D teaches the lesson of treat others how you want to be treated – The Golden Rule.

4. You burned popcorn in the microwave. You know your mom will be mad about the smell and the irresponsibility. Your friend Jack just left. You could say that he popped the popcorn and put the timer on too high, and it will get you out of trouble, and besides: She would never yell at him, so nobody will be in trouble. What would Jesus do?

a. Just say he burned the popcorn, and nobody will be hurt.

b. Tell your mom the truth. Even if she yells, it might be a good opportunity to discuss how her yelling isn’t always fair.

c. Say, “That Jack! What is wrong with him?” You’re not exactly lying because it’s just implying.

d. Tell your mom the truth and remind her of the horrible smell when she burned the meatloaf that week; point out the hypocrisy if she yells.

Answer: B. A and C are lying. Implying a lie is lying. D might be honest, but brutally so; if you want someone to listen to you, don’t go on the defensive. B is best because it not only tells the truth, but it provides opportunity for honest discussion that you might not get otherwise.

5. In school, everyone was given a piece of candy by the teacher and was told not to eat it until you get home. You lost yours on the playground. When you get back to class, you see more candy sitting on the desk of the kid seated next to you. He is in the bathroom, and besides: He’s diabetic and isn’t supposed to eat candy. Do you just take it? What would Jesus do?

a. Yes, take it and say nothing. You’re actually doing him a favor by not letting him be tempted with something he shouldn’t have;

b. Take it quickly and simply eat it. There’s no giving back what has been chewed up.

c. Tell him you want to take it home to your sister in a wheel chair. As he lives with an illness, he will be understanding.

d. Offer to swap him something. Make sure it’s a fair trade.

Answer: D. With A, the motive is wrong. The motive is to get the candy, and it’s not really your place to decide what somebody else needs. B is the worst, really sneaky and thoughtless. C is a boldface lie if you don’t have a physically challenged sister, especially if you just want to eat the candy yourself. D is the wisest choice. It not only is fair, but it gives you an opportunity to put yourself in the other guy’s shoes and think of something he would really like to have. It might take away his disappointment about not being able to eat the candy.

6. Your mom told you to walk the dog. She isn’t home from work yet. Your favorite TV show is on, and if you walk the dog you’ll miss part of it. You can just tell her you walked the dog. She’ll never know the difference; the dog can’t talk even though he might really need to go. What would Jesus do?

a. Take the dog out, try to hurry him along as best you can, and try to guess what happened in the show while you were gone;

b. Wait until after your show and hope that Mom isn’t home by that time;

c. Lock the dog in his crate, because even though he really has to go, dogs don’t pee where they sleep;

d. Give the dog a bunch of treats to distract him from his discomfort.

Answer: A. B risks disobedience, and you can get in trouble; C and D are not putting yourself in the poor dog’s shoes, and you can practice the Golden Rule with a pet. If you really had to go and you were a dog, how would you feel about this kid just sitting on the couch and watching you suffer? A is not only the right thing, but it gives an opportunity to imagine. Imagination is a gift from God, and who knows? Maybe you can end up imagining even better dialog than what went on in the script!

7. During a test in school, you see a kid copying answers from the kid sitting next to him. But the cheating kid is kind of big and scary. You’re not sure you want to get him in trouble by telling. He might be mean to you later. What would Jesus do?

a. Mind your own business; it’s safer;

b. Tell the teacher when nobody else is looking. It’s honest but safe;

c. Tell the teacher in front of everyone; after all, Jesus said “Shout the truth from the rooftops!”

d. Tell the cheating kid to cut it out or you’re telling.

Answer: Probably B. Answer A really does not generate fairness and it’s self centered; you’re looking out for you. The best Christians are those who look out for Jesus, for right and wrong, and for what Jesus would do. Jesus did say to shout things from the rooftops as mentioned in answer C, but Jesus also said not to cast your pearls before swine and thereby have them trample you. It may not be wise to provoke a bully, which is why C and D might not be as good as B.

8. Your friends want to walk out on the lake after it freezes. Your mom has told you never to do this, and you tell your friends as much. They laugh at you and call you a baby as they head out onto the ice. What would Jesus do?

a. head out onto the ice with them. The ice probably won’t break, and your mom will never know;

b. head out onto the ice with them but only go a few inches, so you’re not making waves and also not really putting yourself in the danger your mom warned you of;

c. Tell them how dangerous it is, but if they won’t listen just go home.

d. Tell them how dangerous it is, and threaten to tell your mom.

Answer: D. Frequently kids will do things that are life or death without realizing. A real friend is the one who tells the truth; kids fall through the ice and drown every year, all of which could be prevented by heeding the warnings of adults and not walking on ice. Answer A could cost you your life; B is not really helping anything. It’s selfish, and if a friend fell through the ice and died, your guilt could last a lifetime. C is being more honest, but this scenario enforces the dangerous false value, “Never rat out your friends.” Kids have wound up in hospitals, juvenile detention centers, and drug rehab clinics because friends refused to seek help from authorities. You can say, “Well, it wasn’t my business to tell,” but that lame excuse rarely eliminates the guilty feeling when a friend suffers the worst consequences and you didn’t do anything.

As often as we remember to ask “What would Jesus do?” the more likely we are to do things that are pleasing to Him. Someday we will see Jesus face to face, and won’t it be the best thing ever to hear him say, “Well done, good and faithful servant?” Will anything else matter at a time like that?

Do you think your students will enjoy this Bible game, and learn from the lesson it teaches?  Share your comments below!  And don’t forget to Become a Fan on Facebook, where I will share more great Bible game ideas, and you can interact with other fans!