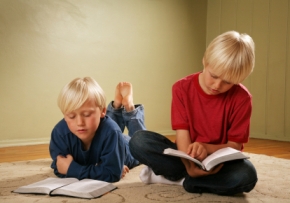 We have heard about how God uses the smallest, youngest and least noticed to do His will. This week, He uses a biggest, strongest guy in Israel named Samson. But Samson looses his strength because he picked the wrong friends.(Teacher words in bold.)

“New Kid” Role Playing
Now we’re going to pretend we’re making friends with a new kid. The new kid will do something and we’ll try to decide whether he would be a good friend or not.

Teacher, pretending to be a child: “Hi! Did you just move here?”
New Kid: Yes! (And then she should recite the line you whispered to her).

1. Yes, I’m new! And I already met one kid on this street. Wow, his house is really dumpy and I bet he doesn’t have any good toys. (gossip)
2. Yes, I’m new. And I heard that big kid say bad words at you when I was standing across the street. If you want to tell my mom, I’ll bring her over. (honest)
3. Yes, I’m new! And I know what. That neighbor left his car window open. Let’s go see if we can sit in the car and beep the horn. (trouble maker)
4. Yes, I’m new. I already met one kid. He told me a secret, so I can’t tell you want he said. (trustworthy)
5. Yes, I’m new. I saw your big sister pull your hair. I was watching from my house. I’ll stand up for you if she comes back. (loyalty)
6. Yes, I’m new! Let’s go to my house and play checkers. I can beat anybody. I never lose. (probably cheats)
7. Yes, I’m new. It’s kind of lonely so far. But Jesus keeps me company. (Loves Christ.)
8. Yes, I’m new. My house isn’t as nice as yours. You’re lucky. (Humble/humility)
9. Yes, I’m new. Watch this. Hi-yyyyah!!! (he makes karate chops at you and your fence) (violent)
10.Yes, I’m new. Wow, you’re kind of fat. Do you eat constantly or something? (hurts feelings)

The others will decide if this is someone they want to play with or not.  Help them along with these prompts: