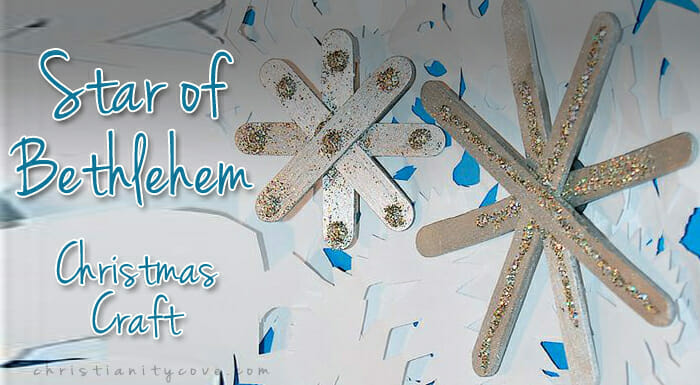 This Star of Bethlehem Christmas craft looks great on a tree or hanging from a window. Get craft sticks, wood glue, and stick-on gemstones or glitter glue, then take an opportunity to talk about what the Star of Bethlehem means to us today.

Cover the learning table with newspaper to avoid paint messes.

Have children do the following:

2. For the bottom layer and the point, put two craft sticks together so that an inch of one is covering an inch of the other. Glue them together.

3. Layer the next three craft sticks dark, light, dark. Lay them on top of the point and move them around so that there is an even amount of space between the shorter points. Then glue them down using wood glue.

5. After drying, cut a piece of the gold yarn 18 inches long. Loop it around the center sticks and tie a knot at the top.

For Discussion While They are Working

The story of the Star of Bethlehem starts with the three Wise Men in Matthew 2:

Now after Jesus was born in Bethlehem of Judea in the days of Herod the king, behold, wise men from the East came to Jerusalem, saying, “Where is He who has been born King of the Jews? For we have seen His star in the East and have come to worship Him.”

Some scholars think this “star” was a comet because comets were often associated with the births of kings.  Other scholars believe that the Star of Bethlehem was a “conjunction,” which is the alignment of planets creating a bright light. Since planets orbit the sun at different speeds and distances, they occasionally “line up” to give the impression of one bright light. There actually was a conjunction of Jupiter and Saturn in 6 B.C.!

Lastly, some believing scientists think the star was an exploding supernova. Some stars are unstable and explode in this way with a bright blaze. They can be seen from earth.  Regardless, it was a sign from God that his son had been born and a miracle, leading the Magi to him!