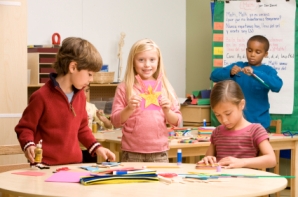 We learned that [tag]Gideon[/tag] was not very sure of himself.  Now we’ll see how he was not very sure his army could fight – nobody was sure! Again, God kept giving him signs that He really was in charge. First He had Gideon ask any army man who was afraid to leave. Two out of every three army men left!

Then, God told Gideon to watch the men who used bad manners while getting a drink in the river. He had Gideon tell every man to leave if he stuck his face to the water like a dog rather than cupping the water in their hands to drink.

That left only three hundred men to fight an army of thousands!

When we give our lives into God’s hands, we get protection from God. It’s like when Gideon agreed to attack the bad army, God protected Gideon. It was still kind of scary, because he couldn’t see what he was supposed to do from one minute to the next. But God told him.

Walking in God’s will is sort of like being under a blanket of His protection.

Bring one child to the other wall, close to the corner, and put a blanket over her.

That means you won’t get hurt by anything. But you have to go slowly and listen for the voice of the lord so you don’t fall.

The child should follow closely that one wall to the voice of the teacher, which will be down at the other end of the room. Say to the student,

Follow my voice, Gideon, and you won’t get hurt!

As she proceeds forward, the other children should throw their foil balls at her one at a time and try to hit her on the blanket. If they hit the blanket, they get a point.
Let each child have a turn being under the blanket and following God’s voice without getting hurt by the “firepower.”