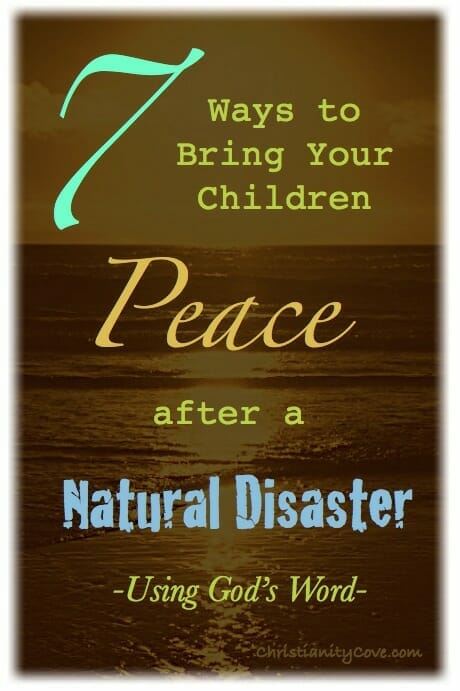 In the wake of Hurricane Sandy, more kids are troubled than ever before.  One theme that keeps arising across the nation is how our planet is changing and how these changes will most likely not make life easier.  Our kids become anxious, hearing the echoes of this – from the school yard, on the TV, and arising in hushed whispers at home.  If the subtext isn’t about changes to nature, it’s about the downturn of the economy.

In an article on Discovery’s Treehugger, Jasmin Malik Chua noted that “one out of three children aged 6 to 11 fears that Earth won’t exist when they grow up.”  Fifty percent of surveyed children admitted to a tremendous fear of hurricanes and tornados.  And with many families cutting back on what once seemed like normal financial expenses–from taking music lessons to keeping the family pet – we all know that kids are fearful about the economy.  “Losing our house” or “having to move” top the fear rosters.

Should we gather our kids for a serious powwow about the state of the world?  Should we wait for them to ask?  How much do we tell them if we talk to them at all?  What if they raise questions for which we have no answers?

Before we even get started let’s remember that our Christian worldview puts us in a much better position to discuss any subject with our kids.  We have far less reason to avoid issues than a secular world which doesn’t tap in to God’s promises.  And the fact is, kids can understand many troubling issues, and they may have to if the weather keeps throwing curveballs and the economy doesn’t heal up.  We just need to know how to sandwich unsettling news with good news that is just as real as the circumstances.  Using God’s Word and God’s guidance are our foremost tools.

Here are 7 messages to calm your children’s fears of tomorrow without avoiding issues and even if you don’t have all the answers:

#1  God is the same, yesterday, today and forever.

This verse from Hebrews 13:8 helps kids feel stable when things around them appear unstable.  Our world may behave differently and, as seen so much on television lately, tides can change the shapes of islands and drastically change communities.  But God always stays the same.  The Lord promises in Isaiah 54:10, though “the mountains may depart and the hills be removed, but my steadfast love shall not depart from you, and my covenant of peace shall not be removed”¦”  One Christian mom realized her young children had been seeing the Trade Center fall a dozen times on TV during 9/11.  She felt compelled to say that “not a single pebble has moved in heaven.  Our eternal home will not ever experience a single thump.  Nor will it ever.”   It led to a lot of conversations about what heaven in like and God is like.

#2  God never loses sight of us, even when we lose sight of him.

Under stress, it may appear harder to sense God.  Whether we’re surrounded by storm surges or are stuck in deep financial pits, we are still human, and we tend to fixate on what we are seeing, hearing, feeling and experiencing.  The good news is that we are foot soldiers in our challenges, but our brigadier general is far more capable than we are.  He knows our every move.  In Matthew 10:30, Jesus says, “Are not two sparrows sold for a penny? Yet not one of them will fall to the ground apart from the will of your Father.  Even the very hairs of your head are all numbered.  So don’t be afraid; you are worth more than many sparrows.”   A child caught in an undertow may have trouble seeing the lifeguard.  That has nothing to do with the fact that the lifeguard is on his way and clearly sees his victim.  Tell your kids to take a load off if they’re feeling like they need to be brigadier generals and shoulder the family problems that are too heavy for them.  The Real General has the answers and will let them know what they need to do in the time they need to do it.

Some kids rescued by a storm surge in Hurricane Sandy reported an inability to sleep “for fear the water would come back when nobody was looking.”  This is easy to understand, as when children are living in stress, the stress is what they feel.  Assure kids that God doesn’t get burned out.  He doesn’t even get tired.  Psalm 121:4 says, “Indeed, he who watches over Israel will neither slumber nor sleep.”  While being pursued by Absalom who was looking to murder him, King David wrote, “I laid me down and slept; I awaked; for the Lord sustained me” (Psalm 3:5).  Everyone, including kids, takes solace in Psalm 23:2, “He makes me lie down in green pastures.”   Kids’ imaginations can ignite their faith, if they are encouraged to call down angels who are assigned to sit on their beds all night and watch them sleep.  One mother reports her daughter giving such angels names, and when she saw how much the little girl believed in them, she became a firmer believer herself!

#4 God allows trials because they often bring out the best in how mankind treats mankind.

Ask your kids:  If we had a live-in housekeeper, would you make your bed every day?  Would you pick up your own toys?”  The answer is probably, “No way!”  Easy times can make people lazy.  They can become engulfed in self-interest.  The Bible says people often “fall asleep” spiritually rather than grow when things get too easy.  In Romans 13:11 Paul says, “The hour has come for you to wake up from your slumber, because our salvation is nearer now than when we first believed.”  Tough times are when people wake up to volunteerism.  It’s when they remember their neighbors, and develop attitudes of gratitude and attitudes of giving. There is no soul more unhappy than the one focused on himself.  Even if you have next to nothing, volunteer anyway and involve your kids in your own giving efforts.  They will start to get perspective on their own challenges and even lose sight of them for a while.

#5 God allows trials because they bring out the best in how man relates to God.

The writer of Proverbs 30, in verses 8 and 9, says this:  Lord”¦ “don’t let me be too poor or too rich.  Give me just what I need.  If I have too much to eat, I might forget about you”¦”  In the Bible the Hebrews inevitably would forget about their God in easy times.  God used hard times to bring them back.  Hard times are a great opportunity for kids to become balanced again if they’ve accidentally turned to the gods of marketing and materialism.  Such does not bring happiness.  Have you ever seen a kid with too many toys?  He’s overwhelmed and often becomes mean and frustrated, or worse, he learns to use material things to have power over others.   It’s in tough times that kids can find the peace in being able to “turn all your anxieties over to God, knowing that he cares for you” (1 Peter 5:7).  It may be a tough early lesson for your kids, but you can begin planting the seeds of an important truth:  Nothing is more precious, more memorable and more powerful than a strong relationship with God – not house, home, pets, clothes, parties, trips to the mall or comfy beds – nothing can begin to match it.  What was true in the Biblical times still holds true today:  The greatest treasures in life are unearthed in tough times, not easy times.

#6  Calmly acknowledging your own concerns is honest and healthy.

Jesus said it plainly in John 16:33:  “In this world, you will have tribulation.”  There’s no way around that.  And however much we want to comfort our children, we should not be carrying it so far that we’re giving them the idea that problems are abnormal.  Problems are normal.  Running from them, hurting ourselves or others in frustration, or ignoring them until it’s too late – that’s abnormal.   1 Peter 4:12 says, “Beloved, do not be surprised at the fiery trial when it comes upon you to test you, as though something strange were happening to you.”  A man has never been born who hasn’t been through one, and there’s no need to shield children at the expense of the truth.  Jesus sandwiched John 16:33 in the good news:  “I have said these things to you, that in me you may have peace. In the world you will have tribulation. But be of good cheer; I have overcome the world.”

“I don’t know” is a perfectly good answer.  It’s honest.  But it’s the height of honesty to sandwich our doubts in the truths that that gospel provides.  “I don’t know, but God does”¦I’m okay leaving that problem in his hands for now” can show your faith and accentuate the point that we don’t need to solve everything immediately.  The great missionary Corrie Ten Boom became horribly alarmed as a child after an aunt died, and it occurred to her that she and her parents would die also.  She brought it up to her father who didn’t know quite what to say.  He finally decided on, “Corrie, when we go to Amsterdam, when do I give you your ticket to get on the train?”  She answered, “Right before we board.”  He said, “God is like that.  Whatever you need to go through in life, God provides your ticket”¦right when you need it.”  She ceased to worry about problems.

The times are a great opportunity!  Having lived through both the Depression and World War II, the last generation of parents seemed to know that tough times are simply part of life.  They knew that their foremost job was not to provide their kids with happiness, but to provide them with fortitude and faith, from which real happiness arises.  These times are like our Depression and our World War II.  It could easily get worse before it gets better.  While we’d all like our kids to live in peaceful times, God knows that it is better for us – and for them – if we learn how to find peace no matter what’s going on around us.  That only comes from him.

Take heart.  Be a good foot soldier.  Do the best you can for your kids, but ultimately, the biggest jobs are up to God himself.  If you help him become the brigadier general of your children’s lives, you will have given them a great treasure.  They won’t remember most of their toys as adults, but they will surely remember that.

Note: For more ideas on how to talk to children about issues going on in the world around them, check out our “Kids & the News” feature in the KidMin Power Pack. 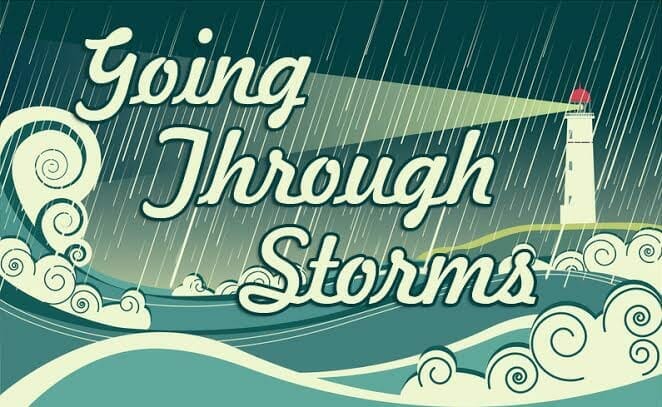