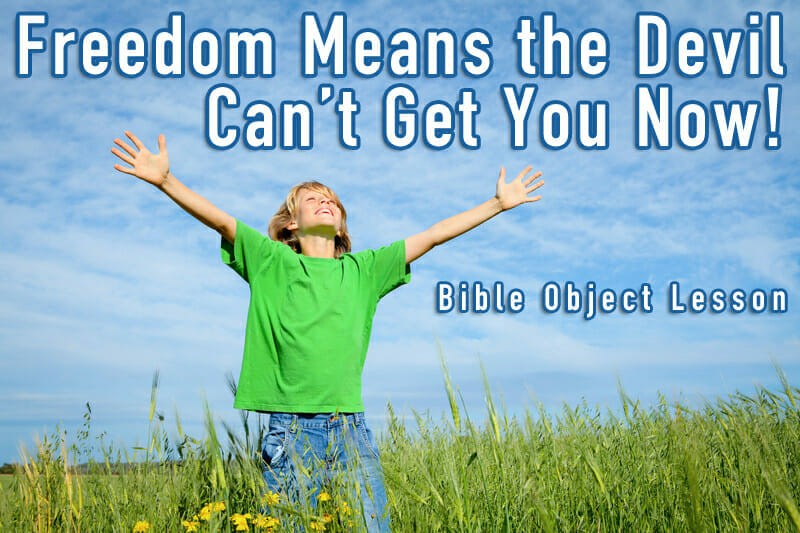 This bible object lesson can bring new meaning to freedom as kids dodge sins until they are placed in God’s family, which is out of Satan’s reach. With Satan represented by a
paddle and ball, you’ll be sure to have a really bouncy lesson!

Paddle & Ball (the classic wooden paddle with the ball attached by a rubber string).

Have all students stand on the line marked DARKNESS. Speak to them with the paddle and ball in your hand.

Fourth of July is about freedom. We’re happy to live in a country of freedom, aren’t we?

Fourth of July to Americans means that we were set free from tyranny.  Tyranny means big governments take advantage of average people. In America, average people had hope of achieving grand things with a government that has acted supportively.

We Christians have it doubly good. We not only have American freedoms, but belonging to Jesus means we’ve been set free from the forces of darkness.

Ask for a volunteer. Blindfold that child. Set her between the two lines marked DARKNESS and AMERICA. Tell her to try to find her way down the path between the two lines to the other end. Advise students to warn her if she starts going out of the lines but they may not touch her. Take your place in the middle of the row of students so that the blindfolded child will pass some students before you and some students after you.

Many people who live in America still live in darkness because they don’t have the light of God in their lives. They stumble around a bit.

Hold up your paddle.

Let’s pretend this paddle is Satan or the forces of darkness. They can touch people who stumble into their paths.

Touch the blindfolded child with the paddle.

This could be a really bad temptation that could leave to a life of bondage or drug use or breaking laws or bad relationships”¦. 1 Peter 5:8 says that “Satan roams the earth like a devouring lion, seeking whom he can destroy.”

Stop the child if she is moving past you. Touch the child again with the paddle.

But here’s what happens when we accept Christ–and accept freedom from him – freedom from the powers of death and destruction.

Take the blindfold off the child.

First, we are given “spiritual vision.” We are able to see more clearly in our hearts what evil is and where it is.

Ask the child, “Can you see this paddle? Can you now see where the force of evil is?” Yes and yes.

Second, we are “moved” into a more heavenly position. We’re still in America, but we’re closer to God.

Move the child across the line marked AMERICA, so that she is standing in the path between AMERICA and HEAVEN. Take her to the beginning of the row and ask her to walk very slowly down that row.

Ask the other children, “Does she have trouble seeing where she is going?” No.

And the forces of darkness are farther from her. She is closer to the light of God. Even the most far reaching efforts of darkness to get her cannot”¦.

Now, use the paddle to hit the ball in her direction. Do it a bunch of times.

She can see evil coming and dodge it”¦in the rare times it would be long enough to reach her.

Give the paddle to some of the kids to try, but give warnings just in case to not use hard hits and potentially get her in the eye.

She is close to the light. Yes, Satan’s reach can come into the Christian realm, but it is much harder, and God’s protection is there for us. We are much more free from the powers of darkness.

Today, as we celebrate Fourth of July, let’s thank God for how doubly fortunate we are as Christians. We have freedom to worship, study, marry, earn a living of our choice, and so many other things. But most importantly, we have Jesus, who set us free from the powers of darkness.