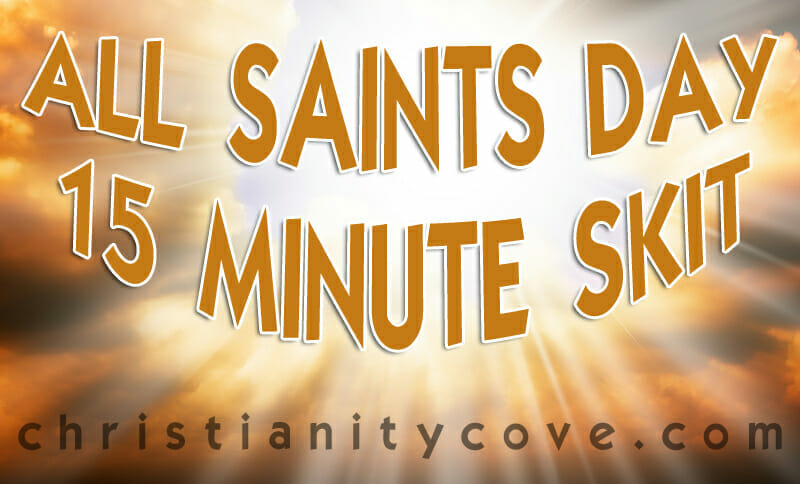 This skit will introduce students to four of the most famous saints. It is straightforward and can be used in class as an activity – or performed for your church at a later time! Being almost free of props and costumes, the skit relies on pantomime and imagination to make it real (very cost effective tools)!

Up to 4 Narrators (depending on your number of students, you can have a narrator for each saint, or one narrator do all narration parts).

Freaked out Villagers (extra students, can be same as Angry Mob)

Four saints come to introduce themselves to you on All Saints Day! Discover through drama why their lives were considered to be among the best and brightest in Christianity.

Stage is empty and very simple.

Narrator:  Happy All Saints Day! What is a saint? Protestants say we’re all special to God and therefore, we’re all sort of like saints–if we believe in Jesus. While we all might be special, All Saints Day gives us an opp to meet some really cool heroes. Let’s find out what makes them so special.  First: Meet St. Polycarp.

Narrator: (whispering to audience): People had weird names back in 70 AD when he was born. (Normal voice) But Polycarp was the amazingly cool guy. And when I say cool, I am meaning exactly what the word means. He didn’t get rumpled or upset easily, and that’s a good thing because he lived in THE WORST TIME for Christianity – back near the beginning. Guess who HE hung out with? The Apostle John, Jesus favorite disciple, according to some. What was that like, Polycarp?

Polycarp: (sighs contentedly):  It was cool.

Narrator: You studied at the Apostle John’s feet.

Polycarp: Yeah. It was cool.

Narrator: And you lived in a time where people could get arrested just for being a Christian.

Polycarp: It was cool.

Narrator: Nearly 2,000 Christians got put to death in horrible ways back then.

Polycarp: Well, it wasn’t all cool.

Narrator: And you were pretty big in fighting money problems inside the churches, which was already starting up.

Narrator: As for your own death”¦(to the audience) You think you got bully problems??? Polycarp got nabbed and taken to a huge arena, where he had to stand in front of, like, 900 bullies. He was really old.

Polycarp: (sighs). Yes, you can see how dangerous I am.

Narrator: And this Roman proconsul took pity on him because he was old and quiet and cool and all”¦

Crowd: Loose a lion at him! The lions are hungry! Make him a lion sandwich!

Roman Proconsul: Shut up! (turns to Polycarp). Listen old man. All you have to do is say three little words. “Ceasar is Lord.” And toss a little incense. You like incense, don’t you?

Polycarp: Incense is cool. But not that cool. Look. (Sigh). Eighty and six years have I served him. How can I blaspheme the Lord who gave me life?

Roman Proconsul: Fine, whatever. Set him on fire.

Polycarp: (sighs) Not cool. But something good will come of this.

Narrator: They tie him to the stake. They light the flames”¦.and guess what? The guy doesn’t burn! The ropes burn. The straw burns.

Polycarp shakes his arms loose, sighs, checks his watch, and gestures at the angry mob.

Narrator: He wasn’t burning at all! He turned, like, gold! A lot of people saw it! The angry mob got freaked out. Somebody ran up and”¦well”¦

Roman Proconsul stabs him with a knife.

Narrator: There was so much blood, it totally put out the fire. And a dove of peace rose out of the mess and flew on up to heaven. You can guess who that was. Cool story?

Polycarp: All of you: Love Jesus. And be cool.

St. Augustine: (proudly) I am known as one of the most intelligent men who ever lived. I sold all my belongings and gave them to the poor. Except for my family home in Hippo. Er, that’s a place in Africa, not an mammal. I wrote a famous book called The Confessions.

Narrator: Yeah, but that was after. (to audience) After what, you might ask”¦

Narrator: (sing-songy and teasing) I know what you di-id. When you were young-er.

Narrator: You were a party animal. You lived with some lady –

St. Augustine: Shhhh! That was then, and this is now!

Narrator: You almost drove your poor mother bats! “˜cause she was a really good Christian. And you were a party-hoppin Minchaeist”¦.pronounced like “MANY CHEESES”¦”

St. Augustine: (fingers in ears) Stop! Stop please – I was a great teacher of rhetoric! It’s like philosophy!

Narrator: Educated, for sure! But you were the wild man on campus.

St. Augustine: Wait. Why am I telling you to be quiet? I wrote the whole thing down, what happened! It’s in The Confessions! I wrote it! My mom kept after me for years, and I finally decided that Christianity was true. But I didn’t convert because I thought I could never be such a”¦such a cleanliving goody-two-shoes.

St. Augustine: Then one day I noted to Alipius, another distinguished colleague, “What is wrong with us?! People a lot less educated than we are – they’re converting to Christianity like crazy! We’ve got allllll this education, and we can’t find the way into heaven?

Narrator: (to audience) We hear the expression all the time now: JUST DO IT.

St. Augustine: I heard a child’s voice. It said, “Just read it!” Read what? I wondered. But there was a Bible in front of me. I flipped it opened. “Huh! The Book of Romans”¦” I read it and just DID IT! Becoming a Christian was very doable. It was just like what I read in Romans that very day. See, God and Jesus do the work. I just”¦was a willing participant.

Narrator: St. Augustine stayed really smart. Even people who think Christianity is stupid still read the stuff he wrote in, like, graduate school and post graduate school. (Huh. That doesn’t make sense. Welcome to college.) Anyway, he was not only a very smart writer but he had on the wall of his room: “Here we do not speak evil of anyone.” He was the bishop of Hippo when he died in 430.

St. Augustine: (bows to audience) Hippo to meet you.

St. Francis: I am known for my love of animals. One time, a friend brought me an injured rabbit. I prayed for the rabbit and told him to be more careful in the future. I put the rabbit on the ground. He jumped back up in my lap. We got to be good friends.

Narrator: St. Francis was from a different era than Polycarp or St. Augustine. He was born in the 1100s.  The most famous story about him? It concerns a wolf. The wolf was eating not only the townspeople’s food”¦it was eating the townspeople! They tried to kill it. St. Francis went out and found it. For some reason”¦it didn’t want to eat him”¦

St. Francis moves across stage, picks up a stuffed dog.

St. Francis:  Now, listen. The townspeople are very afraid of you. If I promise that they will always feed  you, will you stop stealing their food and”¦everything else?

St. Francis:  Okay, let’s go find them and tell them.

Narrator:  And the wolf walked beside St. Francis, and they went back to the town.

Narrator: And the people all freaked out and started climbing up the trees and stuff.

Freaked out townspeople:  Kill that mangy flea bag! Let’s hang it by the tail!

Narrator: Until they noticed”¦

Freaked out townspeople:  Hey! That wolf’s tail is wagging!

St. Francis:  The wolf is just hungry. He doesn’t want to have bad manners or hurt anyone. Can you promise to feed him?

Narrator:  They promised. St. Francis is known today as the patron saint of animals. Later in his life, he  had this huge miracle. It’s called a stigmata.

St. Francis holds his hands out and smiles.

Narrator:  It’s when you’re praying and you get all caught up, and your palms bleed like Christ’s. It’s rare  and very, very cool. Bye for now!

Narrator:  St. Joan lived in France in the 1400s. She came into her teenage years a lot like some of you  guys did – she felt odd, out of place, and lonely in her life. The good news for her was, she  ended up with some awesome company. When she was thirteen, she heard God’s voice.   Then she heard St. Katherine. Then she heard Michael the Archangel and St. Margaret.   She got the gist of it:

Joan:  I was supposed to help France win against the English who were invading.

Narrator:  Joan was injured twice – really badly. She was the youngest person to ever lead battles in  France and she was surely the only girl. But years earlier, Merlin the Magician, a real guy by  the way, predicted that the armies of France would be led by a maiden. But like most women, she got the shaft. Some really rude French guys sold her to the English. The English tried to get her to say she didn’t hear any voices. She got all turned around. She finally said

Joan: (holding her head in confusion)  Okay. I guess I was crazy.

Narrator:  Problem was? She wasn’t crazy. And everyone realized it after they burned her at the stake.

Joan:  I didn’t mind. I knew Jesus was coming to rescue me. I kept saying, “Jesus? Jesus? Jesus?”

Narrator:  Later, her trial was overturned. It was decided that Joan had been wrongly executed by a corrupt clergy. (turns to her sadly) Too late for Joan to ever live a normal life.

Joan:  (shudders) Who wants to be normal?? Not me. It all worked out in the end. I’ve got my place  in heaven.

Narrator:    That may be one of the biggest differences between the saints and us. They don’t want to be  normal. They want to be awesome. Next time we start feeling weird? Let’s thank God! Who  wants to be normal, and how boring is that?! There’s four Saints we hope you got to know. There are over 10,000 saints acknowledged by the Catholic Church alone. They all experienced miracles in their lives. The truth about God and Jesus didn’t end with the New Testament. It lives on and on”¦in the lives of the heroes we celebrate on All Saints Day. Let’s make it a really good one and practice “saintly behavior” all day! Have a good one!

Do you have other All Saints Day activities that you like to do with your kids?  Share your thoughts and comments below!  And don’t forget to join us on Facebook, where you can discuss this, and other great ideas with other teachers and parents!