Some wise people describe that act of resisting temptation like being in a tug of war. A part of us wants to commit that sin. Your conscience, where God keeps His spirit, will tell you to do the right thing. It “tugs” on you.  You can use Sunday school games to help teach children how to recognize and react to acts of temptation.

Learning what temptation feels like and how to resist.

Preparation:
Fold the bed sheet in fours lengthwise. Tie knots at the very ends so that kids can tug on it in a tug-of-war and have the knot to keep their grip.
Draw a line down the center of the floor with masking tape. Write “Temptation Station” on it with arrows pointing in one direction. Keep your bag of large marshmallows ready.

Object: To pull the temptations out of Temptation Station without getting pulled in.

Introduction:
Some wise people describe that act of resisting temptation like being in a tug of war. A part of us wants to commit that sin, like

– Say something mean back when someone is mean to us, or
– Take something that doesn’t belong to us, or
– Tell a lie we think will keep us out of trouble.

Your conscience, where God keeps His spirit, will tell you to do the right thing. It “tugs” on you.

But sometimes we want a bad thing, and we have to resist. Temptation tugs at us too.

It’s sort of like this game, where we have to “tug” to stay out of Temptation Station so that we don’t do the wrong thing.

Instructions:
Have half your students be Temptations. Put masking tape signs on their shirts that say things like “LYING,” “STEALING,” “BULLYING,” and “SWEARING.”

Have the other half be Resisters.

Try to make both teams fairly evenly matched in strength at first.

If the Resisters lose, they have one chance to get out of Temptation Station. They have to do the “Marshmallow Walk” without dropping or tasting the marshmallow as follows:

Start at one end of the line of masking tape that is marked “Temptation Station.”
They must put their heads back, balance a marshmallow on their lips, and walk the line to the other end without dropping the marshmallow or tasting it. Their feet may step off the line, so long as they are going in the right general direction. The student must have his marshmallow to the teacher in the end without having licked it.

Mix the kids up for further rounds, having the Temptations giving up their masking tape signs to others as they switch teams. This way, you’ll assure that each team will win some and lose some.

The Marshmallow Walk part of the game teaches us something: If you lose out to temptation, things get complicated! It’s better not to get tugged into Temptation Station in the first place. Let’s all have a marshmallow snack now to celebrate God’s help for when temptation starts to tug at us!

Hand out the graham crackers, chocolate and marshmallows at the table so kids can make s’mores.

If you liked this activity, you can find more Sunday school games in our Bible Games area!  And be sure to “Like” our Facebook page and get a free ebook with 20 faith-based crafts! 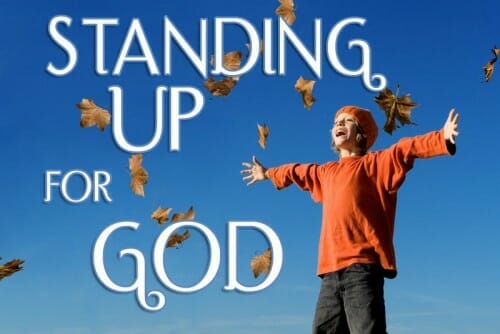